It looks to me like the conntrack-sync feature works best when:

All traffic flows through a single VyOS node until it fails. On failure of the active node, VRRP on the surviving node:

Because conntrackd is caching flow updates (not injecting them into the kernel on the receiving system in real time), this configuration of conntrack-sync is necessarily an active/standby mechanism, closely coupled with VRRP.

Is that a reasonable summary of the basic capability?

I’m trying to figure out whether I can make use of conntrack-sync for firewalling AWS site-to-site VPN connections within a topology like this: 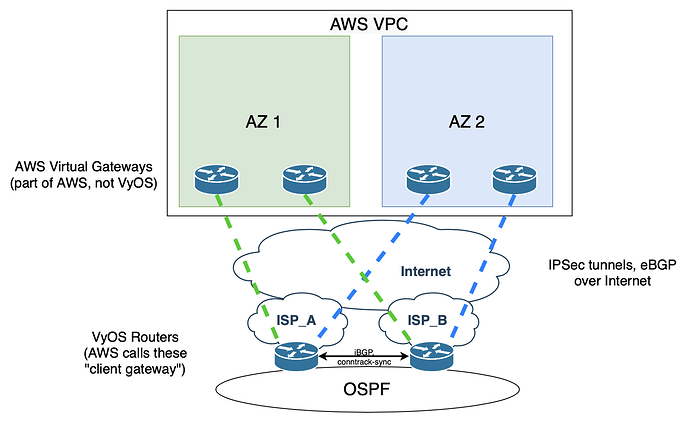 Because I can’t reliably influence traffic to force flows only to the “active” VyOS node, populating the conntrack table with a VRRP-based trigger isn’t very helpful.

My experiments with using conntrackd's DisableExternalCache feature to share flow state in real time are promising, but leave me with two questions: