I’m running into a performance issue when routing data between 2 subnets.
I can reproduce it with iPerf3 and its strange as it only happens in 1 way.

So, the issue is happening when routing TCP data between 2 subnets/Vlans.
My Desktop is on subnet A and my NAS is on subnet B.

I have GRO, GSO, SG And TSO offloads enabled and I have fine performance on everything except on traffic going from Subnet A (Vlan50) to Subnet B(Vlan1).

Here is my setup:

Here is a visual representation:

My thoughts and tests on points above:

Additionally, I’ve checked and both VyOS, the Router and my Desktop are set to 1500MTU, with the Switch configured to allow Max Frame size of 1518.

Any ideas what could affect the routing only 1 way or troubleshooting I can do?

Did you check the MTU on the NAS?
Can you paste the output of the command from VyOS?:
netstat -s

Indeed check if packets get fragmented
Could also be combination of tagged vlans, 802.3AD and used NICs not performing.

I don’t think it is, because every other scenario is working fine.
For example, I have 1000 Down, 400 Up internet connection and I can download at 100MB/s without any issue.
If it was an issue between Vlans and 802.3AD, I would expect to affect any traffic between VyOS and the Switch.

Also, the NIC that I have on VyOS is an Intel ET2 Quad, which I have a hard time believing would have issues with this config.

My idea behind previous post: Probably VLAN1 is untagged, and there is no speed issue for traffic entering on vlan1
However, the other way around, traffic enters on tagged vlan , giving cpu load.
On which process CPU spends most time?

To prove LAG is not an issue, test the LAG by removing 2 of the 3 members and see if the issue persists. Then, if it clears up, add back one at a time.

Also, it appears you have two lags, 2G from the NAS and 3G from router to switch?

Have you checked CPU/memory on the NAS?
Watch your resources as you transfer data from the NAS, across the network to your desktop and paste it here.

Can you get a pcap and paste it here?

Thank you very much for the ideas guys, I will give them a try.

@16again
yeah its a good point, I really thought I had VLan 1 untagged, but I just double check and I’m actually sending all VLans (including 1) tagged to router via the LAG.
Then on the router I defined the subnets based on it.
Here is my LAG interface configuration on the router:

Regarding the process, its a single interrupt, maxing out a single core.

This is a 4 core CPU and its strange it doesn’t try to use more in this instance.
The NIC supports it natively and it does spread the load in other scenarios.
For example, here is the CPU usage while doing a 1Gbit/s download speedtest from the internet:

In this last screenshot we can see a process called “kworker/u8-2-bond0”, so I wonder if that process is responsible for the LAG. If it is, kinda proves that is not the bottleneck.

@ocosa
Yes, the NAS right now has a 2G and the router a 3G.
In fact, the NAS is configured to use a 4 member link, but I only have 2 cables connected.
I’ve done the test you suggested from the NAS prespective but not with the Router LAG.
I will give it a try and report back.

Regarding the NAS resources, its an HP DL380p running TrueNAS with a 6c12T CPU and 32GB of Ram, barely breaks a sweat, its like 15% CPU usage if that much and most of it most likely is ZFS computations.

Is there any other offloads I can set on the NIC other then the 4 I already defined (GRO, GSO, SG And TSO)?

@ocosa
Just tested the router with a single member connected and no difference.

Hi @Ralm,
What types of NICs are in the bond on VyOS?

oh, forgot to mention, I’m running VyOS 1.3.0-rc6.
I will update it to the epa3 release and double check if the issue persists. 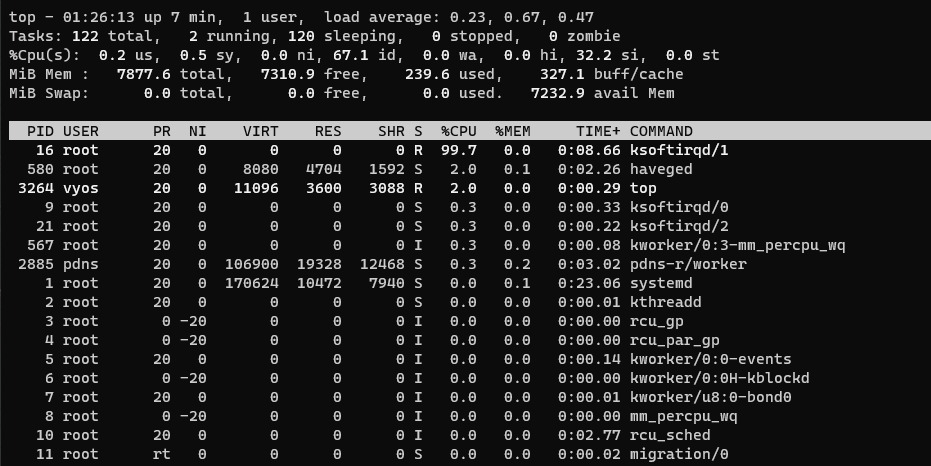 Again, that doesn’t explain why every single scenario on my network is fine except for a specific route.
Also, if you notice, that thread was mine and was a problem of PfSense running extremely outdated drives. That thread was the main reason I moved to VyOS.

I don’t see any logical explanation to be an issue with the NIC directly or the LAG.

Now, between the exact same 2 machines:

This for me looks like some configuration issue, some edge case or some offload missing.
I’m even curious if VyOS 1.2 doesn’t have this problem at all again, because I’ve been having many issues with VyOS 1.3 due to all offloads being turned off by default.

Enabled RPS offload (Receive Packet Steering) and has improved the CPU usage significantly, however the performance is worse overall.

Hello @Ralm, did you try to increase ring buffers?
Which LAG balancing mode was configured?

Hi @Dmitry,
I wasn’t aware of the ring buffers, I’ve never played with it, but I did some research and found this nice article from you guys at System Optimization - Knowledgebase / General / System Settings - VyOS

I will play around increasing it a bit to see if it helps.
FYI currently, its set as following:

The LAGG is set with 802.3ad and is the interface for the entire network.
On the Intel ET2 Quad interface, 1 port is used for WAN directly, all other 3 ports are used in the LAGG between VyOS and the switch.

This is why I haven’t consider it much as the root of the issue, otherwise I would expect it to affect all traffic.

I’m also working on testing having 2 machines, on separate Subnets, but same VLAN, to take VLANs out of the equation.

Is there any other statistics and so on I can take a look while doing the tests? like routing or nat?

if it’s possible you should try changing :

on each interface that it’s part of LAG